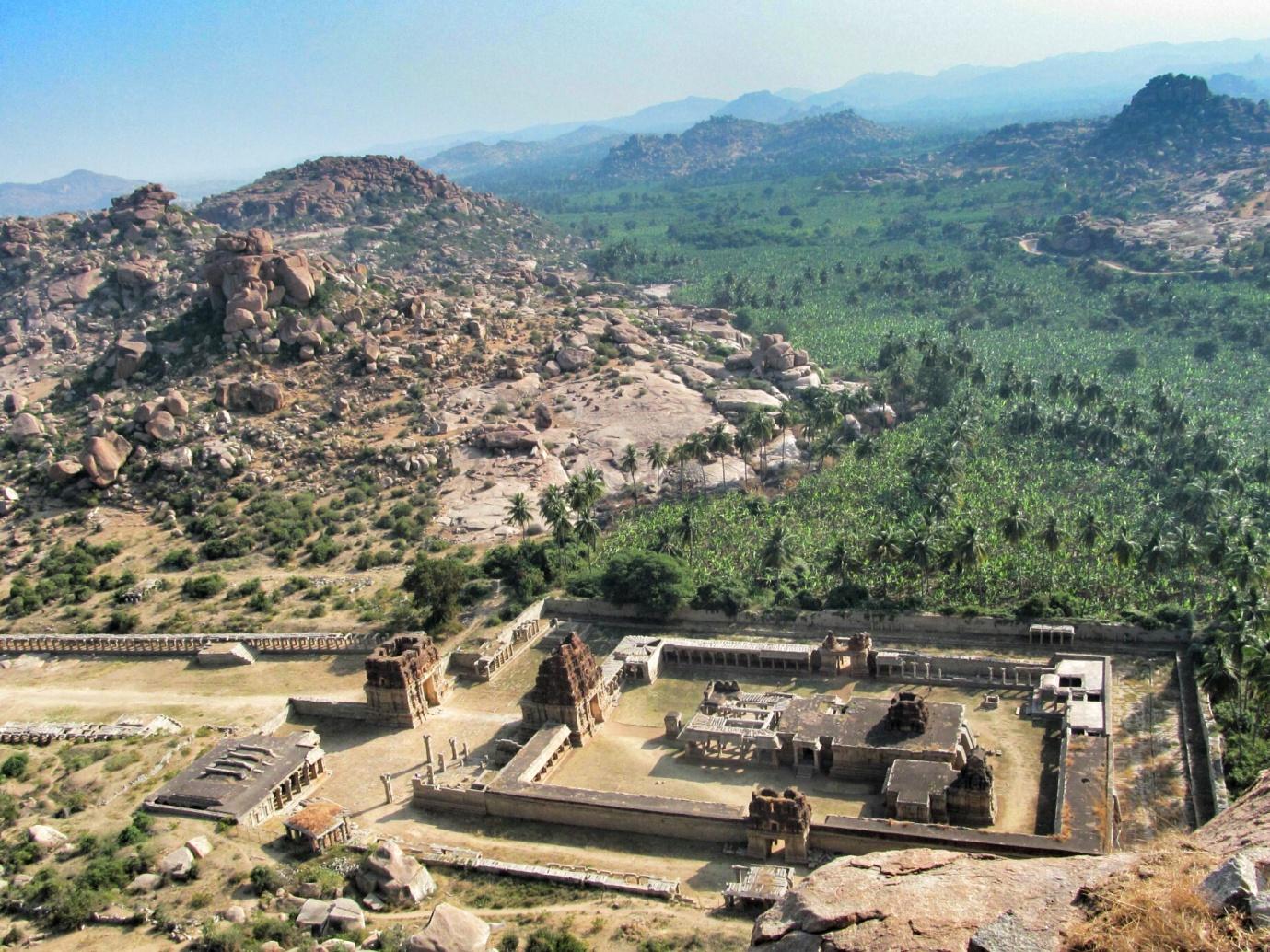 “Hampi?” I thought, trying to sound it out in my head, as my eyes followed the small red lines on the map in my worn Lonely Planet guide. If one were to google Hampi, the search results would reveal that it served as the capital of the last great Hindu Kingdom of Vijayanager, dating 1300-1500 CE. It has been classified as a UNESCO World Heritage Site, due to its exemplary temple architecture, unique topography and the testimony it bears to a vanished civilization. When I travelled to Hampi in December 2012, however, I didn’t bother with Google. And in retrospect I have found that the real experience of that mesmerising, remote part of India far surpassed the depiction provided by any internet search engine...
Over the rattling of the train I could just hear the faint rhythmic breathing of the five other sheet clad forms sleeping in the carriage. A dusky, barren landscape was beginning to emerge through the grimy glass of our window and I peered over the edge of my metal bunk to better see the new world to which I had been transported overnight. I had heard of Hampi, in the Indian state of Karnataka, as being a place like no other on earth. Thus, on the recommendations of many fellow travellers, I decided to steer my journey inland, braving an overnight bus, a day stopover in Bangalore and an overnight train, to get to a tiny, remote village in the middle of endless nowhere.  Yet the dream-like scene forming in the growing light before me exceeded the awesomeness I had imagined. The sun breaking over the horizon cast golden light over huge rocky outcrops, piles of massive boulders rising impressively amongst vast plains of scrub. Boulders balanced precariously on top of one another in bizarre looking towers and mounds, as if God had decided to create modern art sculptures in the middle of a desert. Describing this to others later, the only comparison I could draw was from popular science fiction; the desert plain and red-brown stone reminiscent of Anakin Skywalker’s home planet Tatooine, and indeed Hampi had an other-worldly quality of being on a completely different planet.
Alighting the train at the stop for Hosapete, I took two steps on the concrete pavement serving as a platform, and was immediately swamped by rickshaw drivers. After negotiating a price to Hampi Bazaar, my backpack and I squashed into the backseat and we were off. As the tuk-tuk buzzed along the winding roads, groups of tropical palm oases started interrupting the rocky plains and further on, the boulder-hills were rising out of bright green expanses of banana plantations. I learnt later that the increased lushness was due to the fact that Hampi is situated on the banks of the Tungabhadra River. From desert to jungle, I tried to imagine what might come next. My thoughts were answered when we surmounted the hill leading down to Hampi Bazaar. Ancient temples and ruins scattered the rocky landscape around us. As we sped past, I gawped at the spectacle, which culminated in an enormous sikhara (temple tower) at the centre of the bazaar.


Wandering through “town”, I accepted the first offer of a room in a young woman’s house and then, after dumping my backpack, walked all of three streets back to the village outskirts. From here stone plateaus rose at an incline to the crest of the hill we had passed earlier. Taking a deep breath, I began climbing. Around me, pillared halls and elevated pavilions stood proudly solitary or linked into larger temple complexes. Impressive columns were intricately carved with figures and animals from Hindu mythology; the elaborate beauty of the hand-carved stone work juxtaposed with enormous age-worn boulders. Panting after just ten minutes, I removed my sandals and scrambled atop the final boulder at the pinnacle of the site. From here, all of Hampi stretched before me, the village lay below, fringed with palm trees, and the river snaked away on either side, carving a path between the craggy hill ranges. The whole place had an air of unchanged millennia; an ancient kingdom in a surreal, tropical desert.
Over the next few days I explored Hampi and its surrounds, visiting sites housing temples, princely chambers and public buildings, all central to Vijayanager society. Old elephant stables, the grandiose royal bathing area, and the erotic carvings lining the Virupaksha temple were among my favourite discoveries. Further delight was found at the Hanuman Temple. Standing atop a hill and accessed by 570 steps, the temple is not only homage to Hanuman, the Hindu monkey god, but also home to a mischievous monkey population. It has been said that Hampi was the inspiration for Rudyard Kipling’s classic novel The Jungle Book, and standing in such temples, surrounded by an eerie wilderness, I felt like I really might meet Mowgli and the laughing ape from my childhood memory.
Being in Hampi is a mind warp: the remnants of a bygone civilization in the landscape of jungle meets outer space, with a tiny village nestled amongst the ruins. Add some monkey business, and you’re guaranteed a pretty unique holiday.